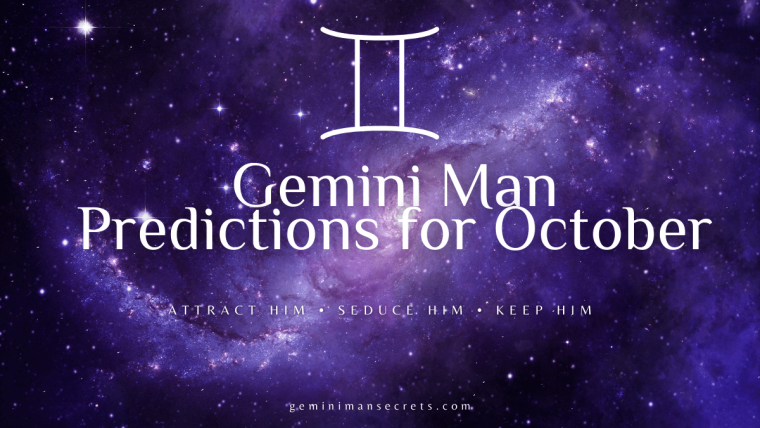 Hello, queens, how are you? I hope all is well and prepared for the next month, for we are here with one purpose, aren’t we? And what’s that great purpose – the Gemini man’s predictions, yes! So, without further ado, let us dive right into it.

The first week of the month brings all kinds of romantic and sweet-talking pleasures with your Gemini man, he is indeed the Casanova of his story, and you should prepare for your heart to be stopped by his crooked smile and unstoppable wit!

The second week of October might paint a heavy heart when it comes to family conversations and his partner’s money, but aside from that, he is ready for the social party that will blast away on the 9th of October when the Full Moon in Aries takes place. He should heed his dreams at this time, and he should definitely not drink too much.

The third week continues enhancing his Casanova charm, it’s at its highest peak, and the Gemini man is ready for any (romantic) occasion! He will be strong on the cash this week, so it’s also a good time to ask for a night out or to borrow money from him if need be.

The fourth week of October is a downer of sorts for our Casanova man, for he is asked to take a deeper and closer look at both his emotional depth and his job. He might have a chance for promotion or an upgrade where his career is concerned. His love life will take a back seat, and his lover or partner might tell him just exactly how displeased she has been with him for the past couple of weeks, uh-oh…

During the first week of October, the Gemini man will live up to his Hermes symbolism, oh indeed – Mars in his first house, Mercury in Virgo – in its exaltation, and Venus in Libra coupled with Sun, his fifth house of fun and pleasure. As well, there is Fortuna in his eighth house of carnal pleasures and intimacy – let the chips fall where they may for his time to shine has come!

It’s a perfect moment for all kinds of romantic encounters, sex magic, and binding spells that include you and your Gemini man, for he is wide open for all kinds of love and potion influences that will sway his heart your way.

But don’t be disappointed if you find out that his heart is not only yours – with a Gemini guy, you can always expect a lover or two to pop out from any nook and cranny, such is life with this Mercurial man…

Anyhow, don’t let that fact damper your spirits – carry on as you were and be prepared for some October magic and mischief. Let your feminine magic do all the work for you during this week!

Casanova On His Mission…

His tongue might be faster than his reason during this week, so it’s best not to take to heart exactly everything he says, especially if he said it in a joking way or in a festive (drunken) mood. However, every joke hides at least half the truth, so be wary of his innuendos and insinuations about his truthfulness and faithfulness.

Some talk about an inheritance or his partner’s money might be pushed forward. He might not like that very much, but he will be wise to take heed and part of it now, rather than later.

His dreams will be wilding out during this time, and it’s quite possible that he will receive a prophetic message or an important omen through his dreams during this time. Influence him to write down his dreams and research the cryptic symbolism, for it might save him a great deal of sorrow in the future.

The third week casts a shining focus on the Gemini man’s own heart desire and his love life. This is a perfect week to go out and about, enjoy heartfelt dates, and have fun being engaged in the games of wit and humor with him!

He is feeling lighthearted, full of himself, and generous when it comes to gifts and emotional expression. This is a great transit to get closer to him and wrap him around your little finger.

This is also a great time for him to devise a birthday gift plan or a party for his lover or partner, especially if his lover is Libra or Scorpio, which he will tend to fall during this time. He should be careful and cautious when having sex this week, however, as his libido and sexual desire might be off the charts, so using protection is an absolute must.

Saving will also be his stronger suit this week, so if you need some monetary advice or you need to borrow money from the Gemini man, he’s your guy. He’s good with money during this week, and he might find that he has some extra cash on him, which doesn’t happen often.

The fall of Casanova…

The final week of October is asking the Gemini man to settle down a bit, and examine his health, daily chores, rituals, and emotions at great length and depth. This is not an easy week for the Gemini man, despite having a Mercury trine Mars aspect in his transit chart.

He is still sweet-talking and his libido and thirst for partying are high, but the New Moon Eclipse in Scorpio conjunct the Sun and Venus in his sixth house paints a different picture of his daily life and his emotional depth.

If he has a lover or partner who’s a Scorpio, this week will be a tough nail for him to crack, because Karma will catch up with him, and he’ll have some lengthy dues to pay when it comes to his romantic life and all the side-chicks he’s carrying in his Casanova bag.

If not, then his sudden turmoil will prevent him from being so lighthearted and light on taking off his pants. He will fall into a kind of melancholy and he will ask himself why he doesn’t have anything more “stable” in his life when it comes to his love life.

His job, however, will flourish and he will have a chance to seize a bigger position of power or a more prominent salary. A promotion might even be in the cards for him if he finds the focus to manifest his career desires…

And there you have it, my queens, a very interesting month for the Gemini man and all his lovers and partners. There’s enough romance for everyone to go around, so don’t get too jealous or grabby about his time with you, there’s plenty for all!

The Gemini man’s mood will be on the hyper-scale this month, or at least for the first three weeks, that might even continue into the fourth week, but he might be forced to feign concern and being down for some of his ladies…

The Gemini man will be the star of the show during October and his libido will be off the charts, which is why I recommend being safe. If he’s not being safe, you should be safe for the both of you, just kindhearted advice.

I recently wrote an article about a Gemini man’s texting style. You might want to give it a look before November approaches, it’ll help you ease through the challenging periods or misunderstandings. Trust me on this one.

All the love and happiness in the world.