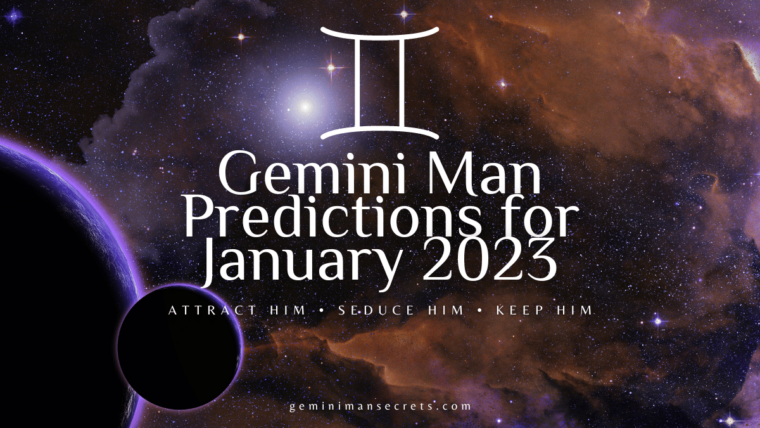 Hello, my dears, how are you and how was the big night of welcoming in 2023? I hope you had a blast because now the time has come to take a peek into the Gemini man’s start for January of this new year. Let’s dive right in!

The first week of January is testing his resolve and how firm he is about his New Years’ resolutions. Now is a good time for him to go deeper into his own heart and examine what’s going on there, without the superficial mental chatter. If he’s brave enough, that is…

The second week offers a lot of room for professional growth, and perhaps even a romantic entanglement in a professional setting. His romantic senses will be on high alert, and he will be extra flirty during this week.

The third week offers a great chance for philosophical debates and simulative conversations that can draw you closer. It’s a great time to start a new activity together, go on a trip, or simply learn from him.

The fourth week offers a lot of social events and the possibility to evolve on a deeper psychological level. His mood will range from extreme extrovert to a secluded introvert. It’s a good time to start therapy or to simply share his innermost fears and feelings with his lover or partner. 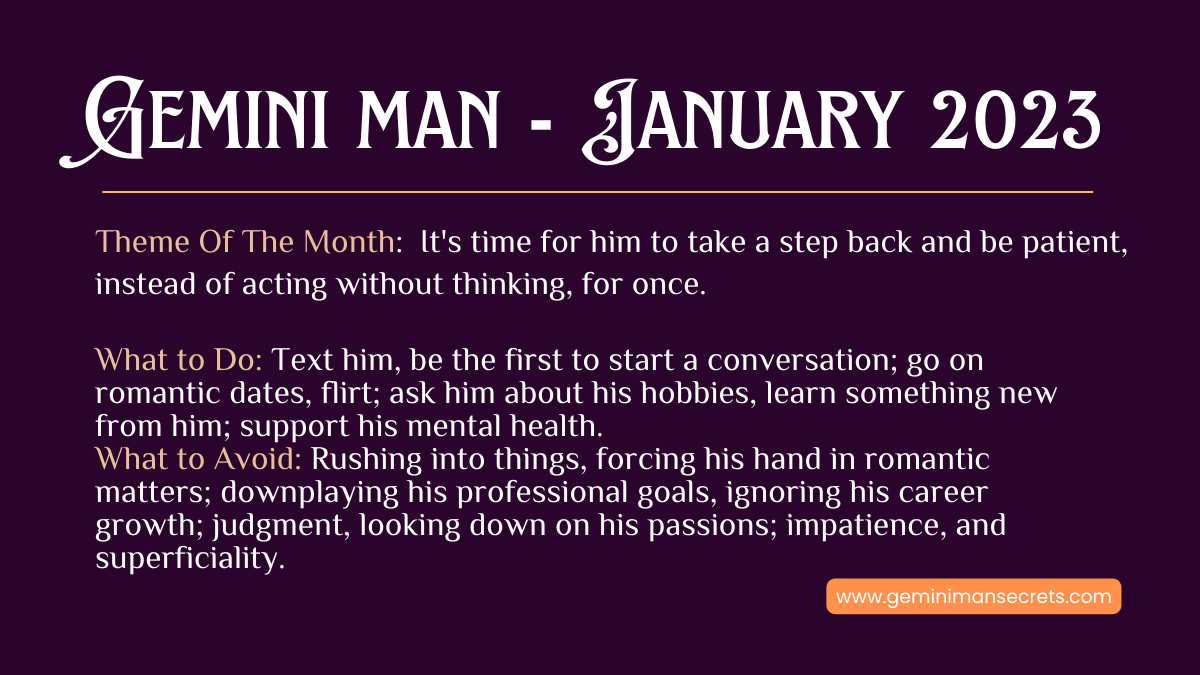 Theme Of The Month: It’s time for him to take a step back and be patient, instead of acting without thinking, for once.

Magic Phrase: Babe, you haven’t even touched your Netflix and chill, what’s wrong, do you want to talk about and dive into the depths of soul mud and emerge cleaner?

Text Magic: Let’s talk about why we feel the way we feel, and what we can do to feel better, you’re not alone in this.

What to Do: Text him, be the first to start a conversation; go on romantic dates, flirt; ask him about his hobbies, learn something new from him; support his mental health.

What to Avoid: Rushing into things, forcing his hand in romantic matters; downplaying his professional goals, ignoring his career growth; judgment, looking down on his passions; impatience, and superficiality.

At the start of the month, the Gemini man will feel sluggish and halted, thanks to both Mars and Mercury being Retrograde. Mars is in his first house and Mercury is in his eighth house of intimacy, sex, and secrets.

He won’t be able to make the first move, even though he’s willing and ‘ready for action,’ either circumstances or his inner insecurities will take hold and prevent him from acting in his best (romantic) interest.

He’ll be prone to overthinking and avoidance during this first week of January, so it might be a good idea to start casual convos with him about, literally nothing, and see where the conversation goes.

You never know, he might even open up about his innermost workings or any mental blockages. This period is good for verbal depth and getting to know each other on a more intimate, yet platonic level.

Watch Your Step And Plan Your Words

During the second week, things become less halted and thus tense for him, thanks to Mars switching to forward movement. Along with the Moon transiting through his fifth house of pleasure and fun. Although Mercury, his ruler, is still Retrograde, he can breathe easier.

This week offers a good opportunity to go out on romantic and fun dates, enjoy good humor and each other’s company, and start being kinky together. But, at the same time, his focus might be drawn to his career and philosophical objectives.

Now is a good time for him to make professional connections, and make a good impression on some big and important people that can propel his career and public life to new heights. He should use it wisely.

There’s also an opportunity for him to meet a unique woman, in a professional setting, and for an instant attraction to take place. He should avoid being too flirty for the caution to not seem too unprofessional or lighthearted.

Tell Me You Love Me

When the third week comes, he will finally feel like his old self again. Both Mars and Mercury are direct now, and that leaves him room to act openly and in a lighthearted manner, as he is used to.

This week is a good chance for him to travel somewhere, somewhere abroad, to experience the magic of foreign romance, and fall in love with a foreign place. Conversely, it can also be a good time for him to learn a new language or to learn some recipes from a foreign cuisine.

Going out on a date in a restaurant whose food you’ve never tried before, or participating in an activity in a place that is foreign to you both, is a great idea for this week.

There’s a New Moon in Aquarius on the 21st, and it offers an opportunity for him to plant the seeds of philosophical growth and exponentially expand his linguistic abilities, and crush down barriers that have prevented him from doing what he really wanted in the past.

David And Goliath Instead Of Jekyll And Hyde

The final week of the first month illuminates the Gemini man’s social and hidden life. He will have a very socially active first part of the week, where he’ll feel like a superstar that has been called to various parties and events to make them funnier and better.

And then, during the second part of the week, he’ll be forced to acknowledge his own fears, nightmares, and shortcomings, which he will not like, but in the end, he’ll get over, because this will make him a wiser (if not better) person.

This is a good time for meeting his friends or hanging out with them, but make sure to respect your own (social) boundaries and if you’re introverted, be mindful not to overspend your social battery and then feel drained for days later.

This is also a good week to start “heavy” topics and have serious conversations. It’s a good week for him to seek professional help for his mental health if he feels overwhelmed, and emotional support (and space) can mean a lot to him right now.

And that’s about it, my dear readers. The Gemini man will have a lot of mood fluctuations this month, but also a lot of ample opportunities for growth and character development.

It’s a great moment for him to grow on a subconscious level, and share his inner journey with his lover or partner. There are two massive lunations (on the 6th and 21st) that can point toward important milestones for his communication and philosophical approach to life.

These planetary transits will play with his subconscious, and he won’t even be able to grasp why he’s suddenly feeling different.

That’s why you need to understand what’s happening inside of him and know how to position yourself through the different phases your Gemini man will go through in 2023.

When you align with his subconscious needs, he’ll have no other option but see you as the only woman that ever got him.

Want to be the only woman he ever needed? In his most challenging, but also in his most fun and beneficial times?

Then make sure you go ahead and grab the opportunity to prepare for 2023 on time. Check what I’ve prepared for you in the link below.

–> Make Your Bond With Gemini Man Stronger Than Ever in 2023

Stay creative, free of mind, and free of spirit. Until next time, my darlings.